You are here: Home / Bathroom / Adding a Solar Shower to Your RV for Outdoor Showers

When boondocking, you don’t necessarily want to fill up your grey tank by having showers, or sometimes you just need a quick post-beach rinse-off so you don’t track sand and dirt in the house.  Or if you have a dog with you, you definitely don’t want to try and bathe them in the tiny RV shower if they have decided to roll around in something smelly.  Or maybe you are travelling in a converted Sprinter van and don’t have anything resembling a bathroom on board, but occasional showers are a must when you can’t hit the gym.

RV showers have come a long way since the old school bag with a hose hung up over your head.  Today, they come equipped with proper shower heads and longer hoses, making using an outdoor shower a much easier experience.

This shower doesn’t go the route of hanging a bag over your head, so you can have much longer showers!  One end of the hose goes into the water source, the rechargeable pump draws the water and it comes with a super nice shower head.  The pump is rechargeable via USB, so you can even recharge it from a battery pack or solar. 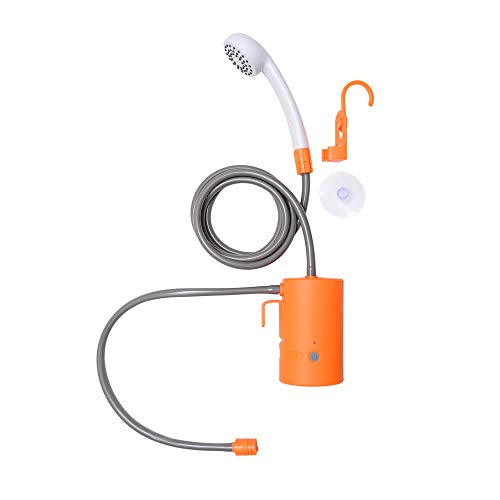 It can be hung up on a tree in a campsite or attached via suction to the window in the RV or vehicle. If you do want to go old school – and save money – they still make camping showers where the bag warms the water in the sun, then you hang it above your head in order to shower.  The shower head isn’t as amazing as the first one, but it gets the job done. 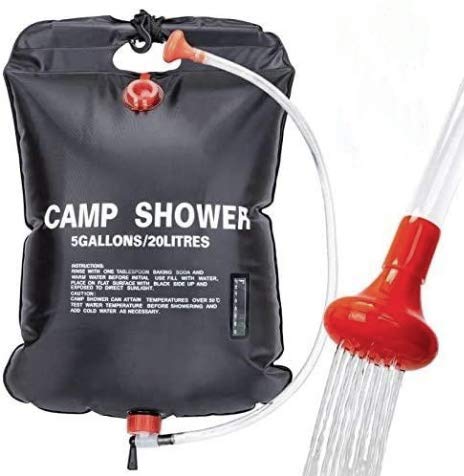 If you are only using your solar shower, and you want a little privacy too, there are these cool little enclosures that set up easily so you don’t have to wear your bathing suit while showering outdoors.    Unfortunately, they only come in what can only be described as neon green.   They can also be used for a outdoor toilet set up as well. 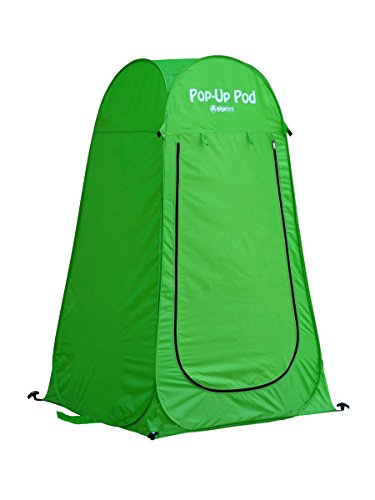